Is commerce ripping the heart out of Valentine’s Day? 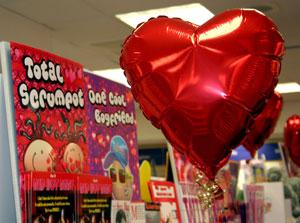 Growing numbers of people are starting to resent the commercialisation of Valentine’s Day and other social occasions (Image: Per Lindgren/Rex)

In questionnaires, respondents said they resented capitulating to commercially driven pressure to buy lavish gifts for a partner.

Others said that if people genuinely love each other, they do so always, and so shouldn’t be forced to spend money proving it on a specific day, and largely for commercial profit. Valentine’s gifts generated an estimated $13.7 billion in revenue in 2006 in the US.

“Excessive and obligatory gift exchange traditions have sparked anti-consumption and alternative consumption behaviours in recent years,” says Angeline Close of the University of Nevada, Las Vegas, and lead author of a paper exploring the phenomenon.

Close and her colleague, George Zinkhan of the University of Georgia in Athens, based their conclusions on a survey of 198 individuals on Valentine’s Day in 2003, and on subsequent analyses of diary and emails.

But willingness to conform fell away in more mature relationships, with only 44% of men and a measly 13% of women bowing to obligation.

“One explanation for such anti-consumption is that gifts are unnecessary to continue a more established dating relationship,” says Close.

But further research examining diary entries and emails revealed that many buy gifts only grudgingly, feeling pressurised into doing it against their will simply to “conform”.

One respondent quoted in the research said: “Valentine’s day is a marketing strategy by the flower and candy companies. It’s a cheesy, overblown, stupid ‘holiday’ to force you to spend money on each other.”

Another said: “Valentine’s Day is a great marketing scam by the greeting card people.”

“Valentine’s Day is a marketing technique designed to take advantage of people who are in love,” said another.

Mike Lee of the University of Auckland Business School, and founder of the International Centre for Anti-Consumption Research said that the results reflect a growing disenchantment with events and holidays that are seen as having been “hijacked” by and for commercial interests.

“They reject what Close and Zinkhan call ‘culturally established ritualised marketplace behaviour’,” says Lee. “In other words, people resist Valentine’s Day because they are morally opposed to the commercialisation of love and the dominant perspective, which they believe marketing has tried to convince everyone, that people must buy something on February 14 to prove they love their partner.”

Lee says that even though “anti-consumption” is still considered a “fringe” phenomenon, it is growing. “Some sceptics may think that anti-consumption attitudes are just the ramblings of a few hippies, but that’s also what people thought of vegetarianism, yoga, the green movement and organic food not so long ago.”

Lee adds that financial difficulties might accelerate the anti-consumption trend.

Close says people can still celebrate the true meaning of the day without buying lavish gifts or giving in to obligations or social pressure. “It’s simply a day to recognise the loved ones in your life, especially the females – your mom, grandma, spouse, crush, girlfriends or colleague – and it doesn’t need to entail much money or time, just sincerity.”

But she says that, ironically, the anti-consumptive patterns could also be seized on for commercial gain. “For traditional Valentine’s Day retailers, there will always be business from the consumer who value tradition, but for others, there is an opportunity for satiric cards, anti-Valentine’s parties and products, singles events and non-traditional relationship products,” she said.